Where to go to the Sea?

Where to go to the Sea in and around Siracusa? 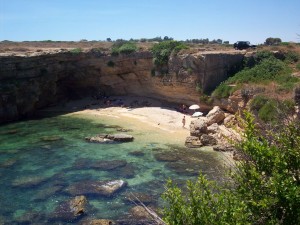 In 2004, the eastern coast of the Maddalena Peninsula, along 14, 35 km, became the Plemmirio marine reserve.

The reasons are multiple. Firstly, the variety and importance of flora and fauna, but also the presence of archaeological remains that are lying on the seabed; Greeks, Carthaginians and Romans have passed thousands of years ago from these shores and today amphorae and other artifacts still testify their passage.

The Plemmirio reserve extends from gate 22 access point, just after the village of Terrauzza, to the northeastern part of the Maddalena Peninsula (Pillirina area).

The coast is mainly composed of the typical granite rock of Syracuse, so white that the sun may almost become blinding; the sea, clean and rich of fauna, is a wonderful blue, the most refreshing water.

If you continue along the main road, until the end of the driveway, you will find yourself at Capo Murro di Porco: a highly evocative place, from which you can not access to the sea due to the very high cliffs surmounting the water. However the scenery is worth a long walk up to the big lighthouse. 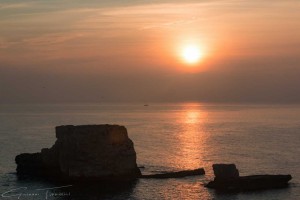 There are few cities that can boast a swimming sea of ​​excellent quality in the city center, Syracuse is one of them. In the busy area of ​​Santa Lucia, located on the central hill of the city, a dizzying cliff lashes out at sea and in some places (for free) allows an easy descent.

It is possible to stroll along this stretch of coast, from the famous Monument to the Fallen in Africa, which stands at the end of Via Arsenale (near Ortigia) until the North of the city access, the so-called “Targia”, via the cycle track: the view is wonderful, especially during sunny days when the clear air and light allow a view of the distant Mount Etna on one side and of Ortigia on the other. Syracuse city is not set up for internal cycle paths, but this one, which was recently lit and is now enjoyable thanks to the public bike-rental service “Go Bike” (bike stands can be found at strategic points of the city, including the War Memorial); it turns out this monolithic cycle path is the longest in Europe, with its 6.5 kilometers.

For the past few years the Syracuse City Council set up a freely available solarium at the famous “Ru Frati” (“the Two Brothers”), two twin rocks rising from the sea; the solarium is accessible from the bike path and is made up of a simple wooden platform that nevertheless allows you to relax and sunbathe during any hour of the day, even when possibly one is not able to reach other remote beach locations. You should visit the site if you have not already done so: the open sea, the crystal clear water is a great refreshment, especially after a walk in the hot sun. 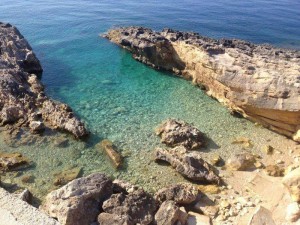 The Ognina Bay is surrounded by a long stretch of coastline which is part of the Plemmirio Marine Reserve; the Syracusans divided the coastal area into two parts, the western, the “Fanusa”, and the further east then joining the protected marine reserve, the so-called “Terrauzza”. In between, the Milocca tip.

This stretch of coast is also one of the most beautiful of the city; except for a small area of low coast at the Fanusa, more or less accessible rocks dominate the rest of the coast up to the Peninsula of Maddalena – this area is all free access.

The area is mostly inhabited for vacationing over the summer months. For all those looking for peace and tranquility, as well as fresh and clean waters, the Fanusa and Terrauzza areas, with their own indigenous flora and fauna, are a great choice. 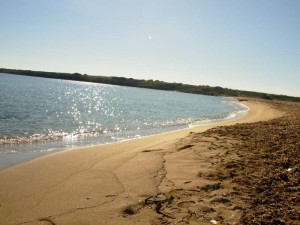 The Punta Renella (later to become “Arenella”, from A’ Renella in Sicilian dialect) is another very popular seaside resort of the city of Syracuse, a gulf located on the larger bay of Ognina.

Inhabited mostly during the summer months, the Arenella offers a wide range of services and facilities that are located along a medium long beach (about 400 meters) of fine sand, overlooking a beautiful sea. Clear water, surrounded by the typical rocks of Syracuse, Arenella is an excellent solution for those who love both beaches and rocks.

One can freely access the sea from two beaches, the “Costa del Sol”, a small bay, and another free area in the extreme southern tip of the beach. During peak season and on weekends these can be filled already in the early hours of the morning. The Arenella offers a wide choice for those looking for accommodation in B&Bs or to those who are willing to rent a house for vacationing.

Located on the border between the towns of Cassibile (SR) and of Avola (SR), the seaside resort ‘Fontane Bianche’ is perhaps the liveliest during the bathing season. The long beach of fine sand (about one kilometer) is well equipped – three private beach areas and a large beach resort – and allows both young and old to enjoy long walks, sipping the drink bought at one of the kiosks, and to use the services for families and enjoy the pleasure of water which during low season is a “Caribbean Blue” colour.

The resort of Fontane Bianche is busiest in the months from May to October, mainly booked by families from the province who have the good fortune to own a summer property, as well as tourists who decide to rent a house for holidays: small streets, lush green, the smell of the sea, the clean air and the beautiful night sky, traditional restaurants just beyond the beach, Fontane Bianche makes for a great choice for those who love fun and the good sea.

At the end of the Avenue of the Beaches – the main road – you will find two paid car parks, a small supermarket and a grill bar. 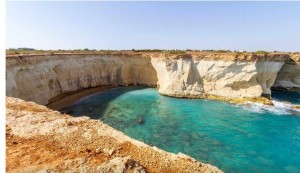 Namely, “the Island” (“l’Isola”), or rather, the Peninsula of Maddalena, is a wonderful location, was recognised as an area of European Community Importance (ECI): the highly evocative natural setting, characterized by a pristine, typical Sicilian vegetation and the unique views, are the fetures that make this area breath-taking even to the accustomed eyes of the local Siracusani, who often prefer it to the other more popular beaches.

A peninsula jutting part of the Ortigia Gulf; driving along the coast by car you can admire the beautiful old town, while looking across the port you will distinguish the Maniace Castle at the very tip of the islet, standing proud in defense of the rest of the city: in the background the volcano Etna, which crowns a breathtaking landscape. Along the coast, bars, restaurants, fishing boats and small boats are in constant activity; access to the sea is made possible in several places: among the most beautiful beaches, the so-called “Punta del Pero” which is right opposite the great Porto; you can also reach it by boat from the old town itself.

Along the peninsula to the south, the low coast is replaced by large cliffs and the gulf water is clears up: the flora and marine fauna become rich; the road is lost and gives way to rich country expanses of fig trees and Indian prickly pear. The wild land and marine reserve do not allow the construction of bathing facilities and, perhaps, this is one of the reasons why the “island” retains a charm that is hard to describe: it is recommended for those who love nature and who do not have too much need for services.

Among the most beautiful bathing areas, is the so-called “Pillirina” (Pilgrim, from the Sicilian dialect), which is the birth-place of many legends.

The Peninsula Maddalena extends south to the Cape Murro di Porco, however, this is usually associated with the ​​”Plemmirio” area itself.